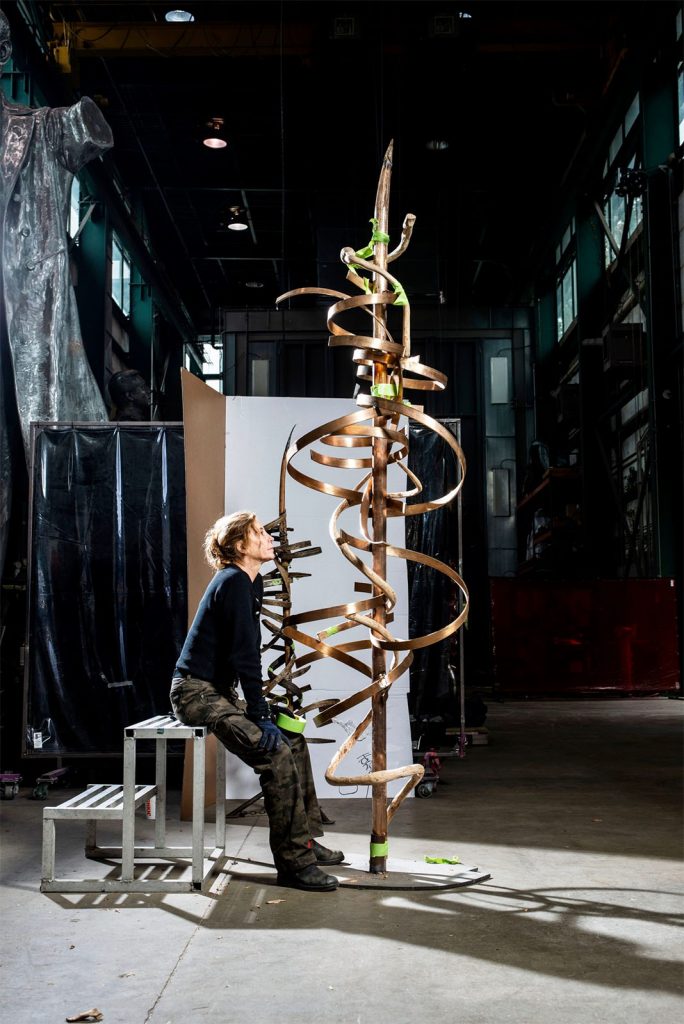 “What is laid bare by the earth and sea is an unconcealed passion made vivid in her work.”

Susan Pullman Brooks was born and raised in New York and recognized for her artistic talents, particularly in painting, even as a child. Apprenticing at the Huntington Fine Arts Academy during high school then graduating with a B.F.A. from The Philadelphia College of Art (now the University of the Arts), she says, “I was passionate about my painting and drawing, but I would get my work done quickly, and then had too much energy and too little discipline to stay in the studio. My assets became my liabilities.” Her conflict between the desire to make art and studying within an academic structure made graduating art school something of a relief. It was then her journey took her in new directions.

Early in the ’90s Susan developed an interest in yoga and in 2003 founded Flip Dog Yoga studio in Bucks County, PA. Her curiosity in Hindu mythology inspired multiple pilgrimages to South India and the influence of Hindu myth combined with the physicality of yoga reignited her desire to make art. This began a slow, sometimes painful peeling back of assumptions about what it means to be an artist, and what her work could become. She reconnected with a childhood love of building from natural materials and reached a creative turning point in 2012. “It occurred to me that what I really love is translating the narrative that appears in my mind into three dimensions.”

Susan sees art everywhere, especially in the natural world in the processes of life and death. She also sees it in the lost and forgotten remnants of culture. A perfect day is spent exploring fields, ravines and midden piles, particularly those surrounding her western New York studio.  Antlers, vines, and detritous from long abandoned farm equipment are gathered first for their own sake, because they are remnants of others’ past narratives. Something draws her to these finds, some combination of shape, texture or evocation of memory. Returning to the studio, her finds are carefully organized and catalogued by finding their place in dozens of archival drawers, first sorted instinctively before being drawn into sculptures that alchemize their origins into her distinctive artistic vision. Rethinking and combining these objects in her studio, her work makes deep and rich connections to Hindu and Norse mythological worlds and is as much inspired by science and other efforts of human imagination. As one critic has observed, “What is laid bare by the earth and sea is an unconcealed passion made vivid
in her work.”

For people unfamiliar with these narrative inspirations her work may appear abstract, non-representational, but it is always imbued with the warmth of familiar objects assembled in provocative ways. For those inspired by the sheer beauty and wonder of her work, we see a leap beyond two dimensions to the wild joy she felt as a child creating landscapes, digging in the earth, walking on the beach, and looking for inspiration in objects left behind.

Susan nurtures her passions and gives them expression in her sculpture.  Re-thinking, disassembling, and combining these objects in entirely new juxtapositions reveals unseen meanings and connections to myth and archetype. Her process creates a balance of grace and symmetry that draws the viewer into a closer appreciation of the details at play together. The final creation is both separate from and infinitely more than, the sum of the parts.

On viewing Susan’s work we are challenged to consider questions like: Why this? Why here? What connections are we being asked to make? What assumptions must we surrender?

In the words of Kate Slocum, “Susan’s sculptures work on me through my memory. They remind me of experiences I’ve had without looking anything like those experiences. I think that they are doors to a type of memory that is pre-language.  These doors of memory don’t just lead back, they also go forward into the possible.”

Living with Susan’s art is like that. There is always something more to see because it acts on that deep connection between our experience of memory, the present moment, and our aspirations.